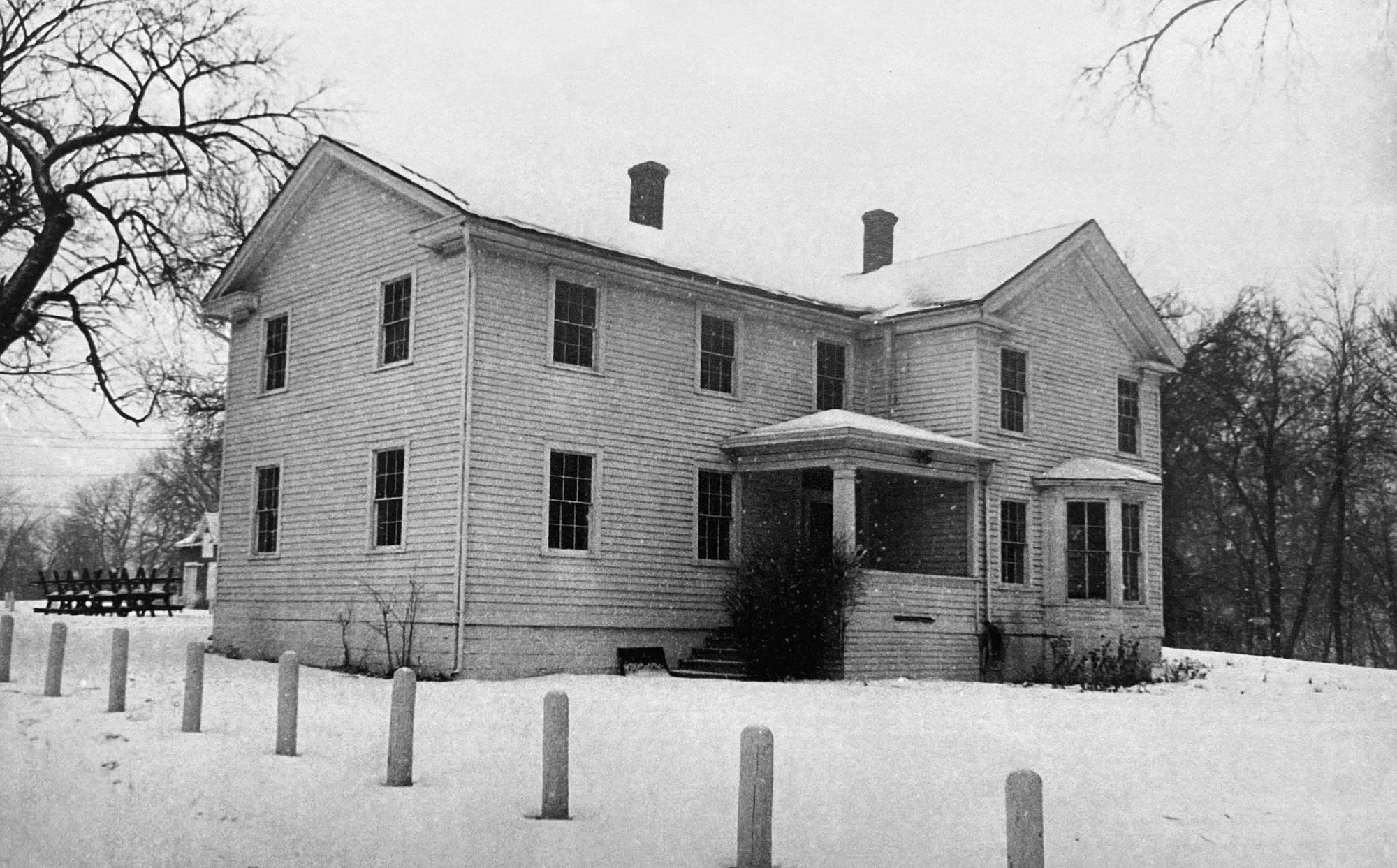 The Banfill House, a two-story, Greek Revival style is one of the oldest homes in Anoka County. It was built in 1847 by John Banfill, and it stands on the east bank of the Mississippi River in Fridley. Initially, it served as an inn and a base for logging operations northwest of St. Anthony Falls. Due to its proximity to Minnesota’s first Territorial Road and the Red River (Ox Cart) Trails (now East River Road), the inn was a welcoming rest stop. Besides being a private home, this property also included a tavern, a dairy farm, a post office and a grocery store.

The exterior and interior of the house remain virtually unaltered since the 1870’s. There are large communal rooms on the first floor that include an entry, hall, dining room, kitchen, and service rooms (where the grocery store and post office used to be). On the second floor, there are seven interconnected bedrooms.

In 1912, Cassius and Roberta Locke made a few additions to the house that included a front and rear porch, electrical service, a pump, a water closet and a sewage system. Cassius died in 1947 and Roberta in 1959. Anoka County purchased the building in 1967 as an unoccupied building, and the Anoka County Historical Society used it as a house museum. In 1988, the building became the Banfill-Locke Center for the Arts. In 2021, the arts center found a new home in Fridley and relocated to the old fire station on East River Road. 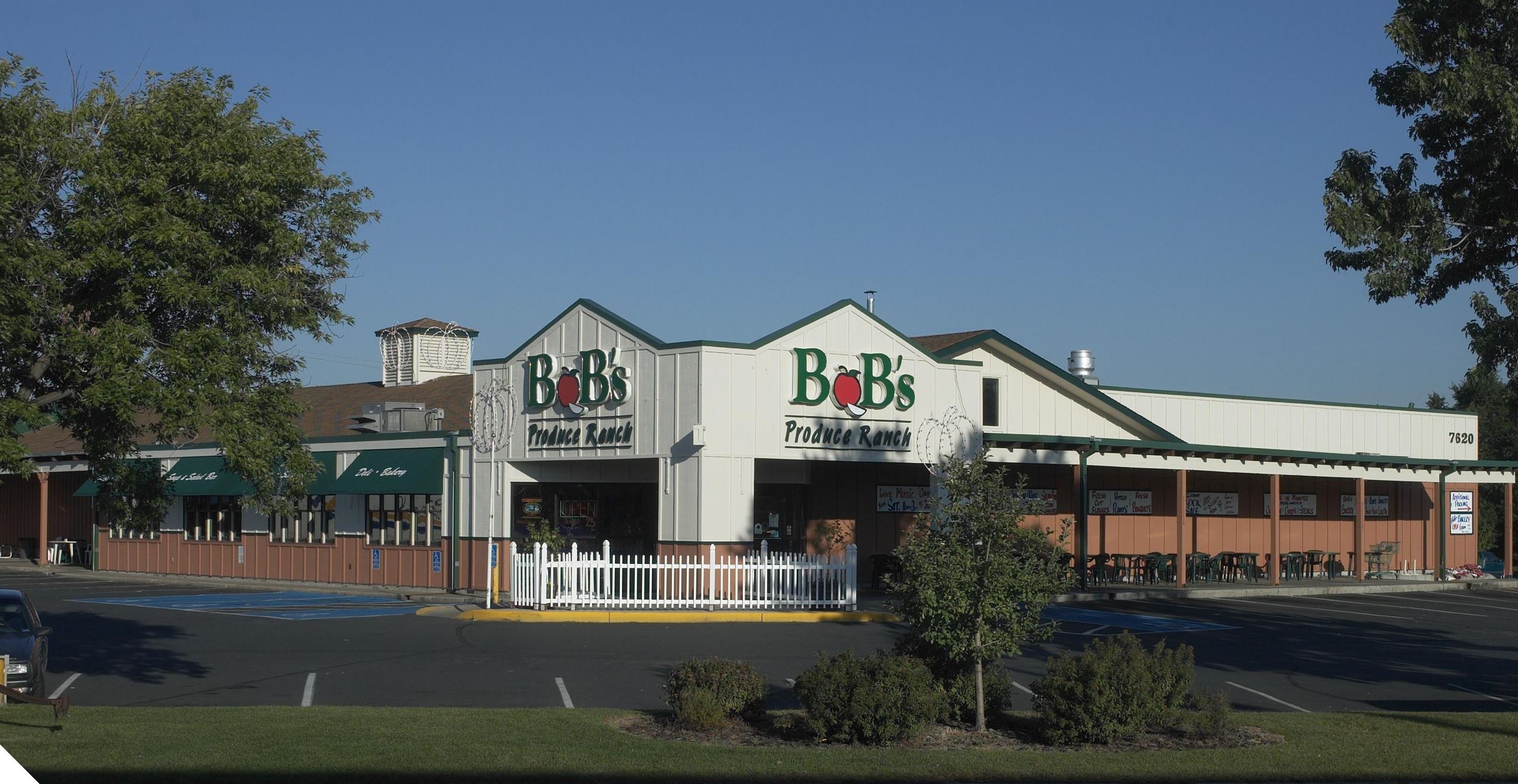 From 1955-1958, Bob Schroer helped operate a roadside fruit and vegetable stand on East River Road in Fridley. BoB’s Produce Ranch opened in the spring 1959 as an open-air roadside fruit and vegetable market. The market originated as an over-sized garage on the corner of Mississippi Street and East River Road. BoB’s featured locally grown fruits and vegetables, many of which were grown on a farm that lay directly behind the market. As BoB’s business began to grow, more buildings were added on. In 1961, encouraged by many customers, Bob added a lawn and garden center to his produce market. Bob hired his brother, Jerry, to run the garden center and Bob’s business continued to grow and develop. Fruit baskets and gift boxes were added in 1964 and were an instant success. Bob’s Produce Ranch was growing like crazy and in the spring 1969, Bob’s moved to its present location at the corner of Osborne Road and University Avenue. In 1970, Bob sold the garden center portion of BoB’s Produce Ranch to the Green Giant Co., which was later sold to Frank’s Nursery. Bob then took the produce portion and began adding a cheese and sausage department, followed by in-store bakery, fresh meat department and full-fledged hot & cold deli department.

In May 1993, BoB’s Produce Ranch had a Grand Opening of its newly remodeled store. From 1959-1999, Bob built up his reputation with freshness, high quality, friendly service, convenience and great value. Through all the growth of his business over the years, Bob also increased what he gave to the Fridley community. He sponsored Little League baseball, hockey, basketball for both girls and boys, helped support the Make a Wish Foundation as well as the Fridley Historical Society, and gave money toward high school scholarships for 30 years. Bob was inducted into the Fridley Hall of Fame in 2005. 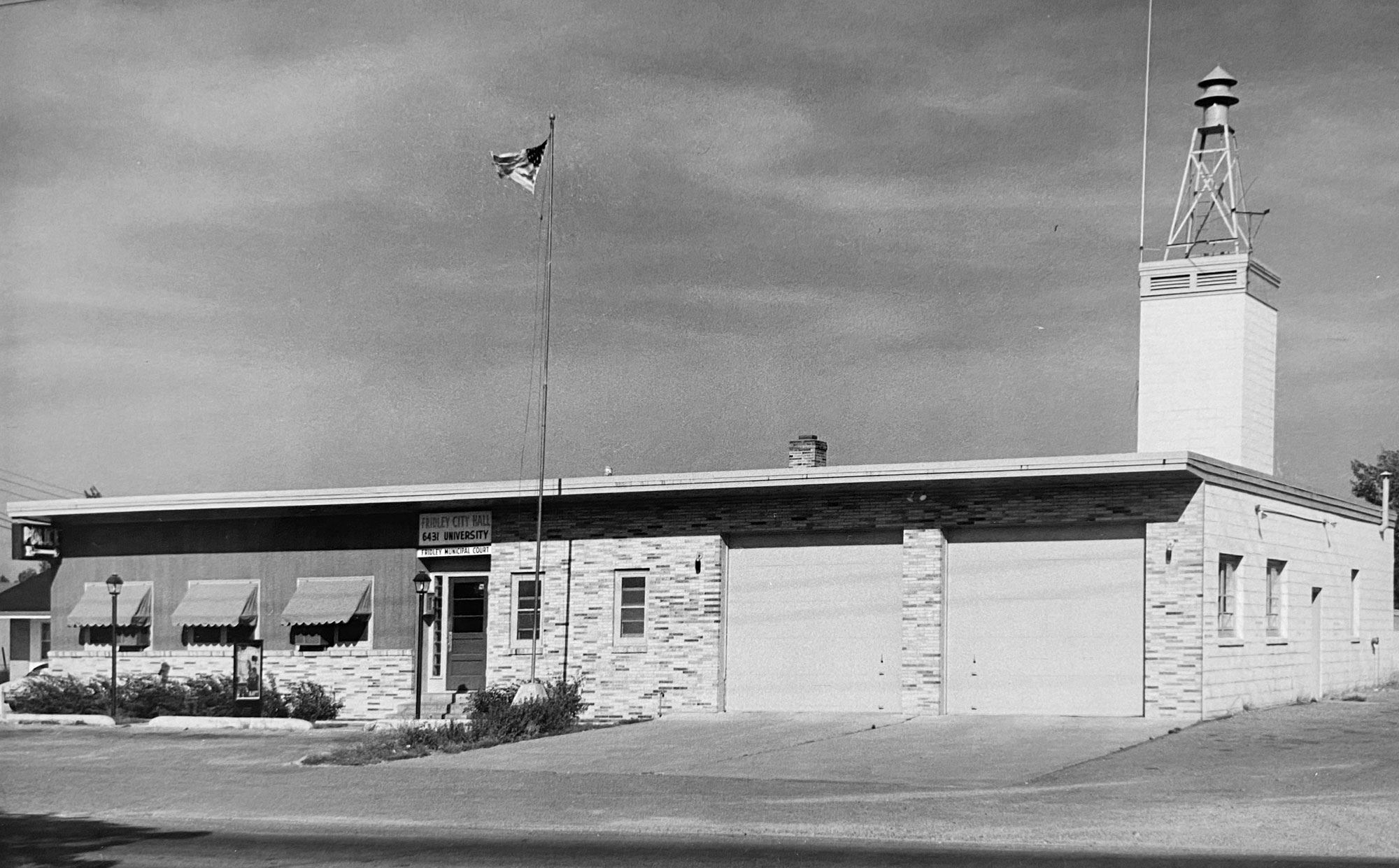 The residents of Fridley voted to become a Village in 1949. However, this did not happen until 1951, when the community of Fridley started to operate as a Council-Manager form of government, ending two years of litigation. The Minnesota Supreme Court ruled on April 6, 1951 that the vote to incorporate the Village of Fridley was finally validated. Because of the lawsuit challenging the incorporation of Fridley, their funds had been frozen. Fridley municipal liquor stores were established, and much of the proceeds were needed for daily city operations. The Village operated two municipal liquor stores, an off-sale store that included a bar located at 7365 Central Avenue and a package store located at 3710 East River Road. The liquor stores were an important factor in helping to finance the Village operations, and more revenue was provided by the liquor stores than was collected from taxes in 1954.

In 1957, the Village of Fridley became the City of Fridley. It was created by the Minnesota legislature as a Home Rule Charter City. This type of governing is not based on population, size or location, but rather is a distinction of organization and powers and the kind of legislation that gives them authority to function. This same year, Fridley’s industrial boom started with construction of a 90,000 square foot warehouse by Midland Cooperative on Main Street. Fridley’s population in 1950 quadrupled to 15,182 residents in 1960. In 1961, the City of Fridley built its first City Hall. Due to development and continued growth, the Fridley Civic Center was built in 1967. This Civic Center was built with the Federal accessibility guidelines. In 1989, that was remodeled and renamed the Fridley Municipal Center. In 2018, a new Fridley Civic Campus was built. 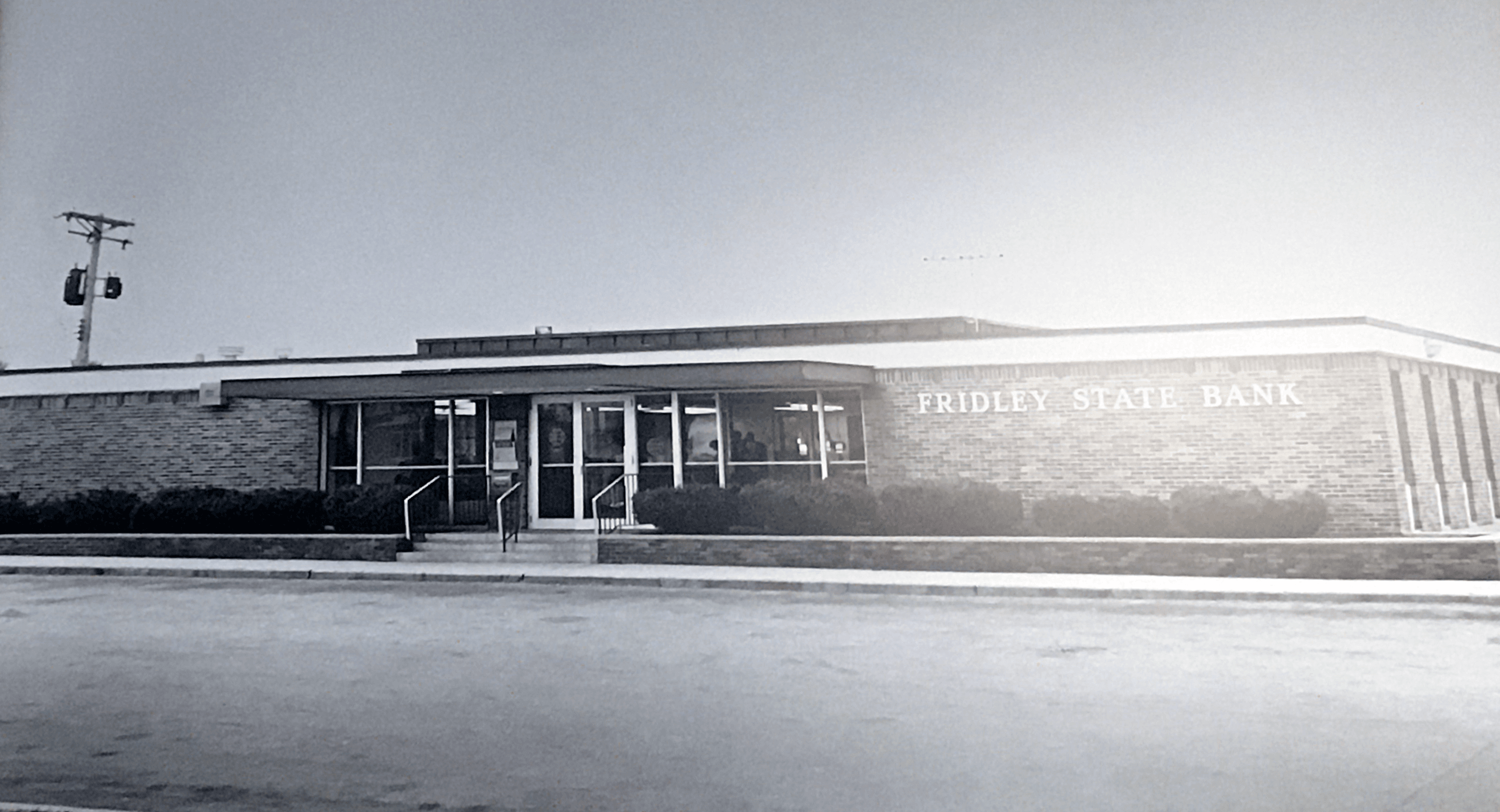 Bill Beery served Bremer Bank in Marshall and Watertown, Minnesota until moving to Fridley to co-found the Fridley State Bank with over one hundred Community shareholders in December of 1962. He was president of the Fridley bank until it was sold to Norwest Bank (now Wells Fargo) in October 1995.

The Fridley Bank was equipped with all the state-of-the-art electronics of that time. It came with a convenient drive-up window, a Diebold after hours depository and eventually an ATM, providing customers 24-hour service. The bookkeepers’ jobs at Fridley State Bank were made easier, too, with the “white magic” of the 20th Century electronics.

This bank in Fridley was a great community bank in every sense of the word. It was a gathering place for many reasons. Most of the employees lived in Fridley, so they knew a lot of the customers. Many of those customers belonged to the community organizations, so some of their fundraisers (bake sales, Girl Scout cookies, Poppy sales, ‘49er buttons) were held at Fridley State Bank. Bill Beery was a generous supporter of education and helped finance students’ projects and needs. He also provided scholarships for students from Fridley High School and Totino-Grace. Bill and this great bank annually sponsored many girl’s and boy’s baseball, hockey, basketball and bowling teams. During Fridley ‘49er Days, the annual community celebration, the bank was always involved. Employees wore western gear (the City’s theme), promoted all events and hosted a barbeque lunch on the Friday during the week of the celebration. Fridley State Bank always had coffee on and welcomed everyone with a smile. 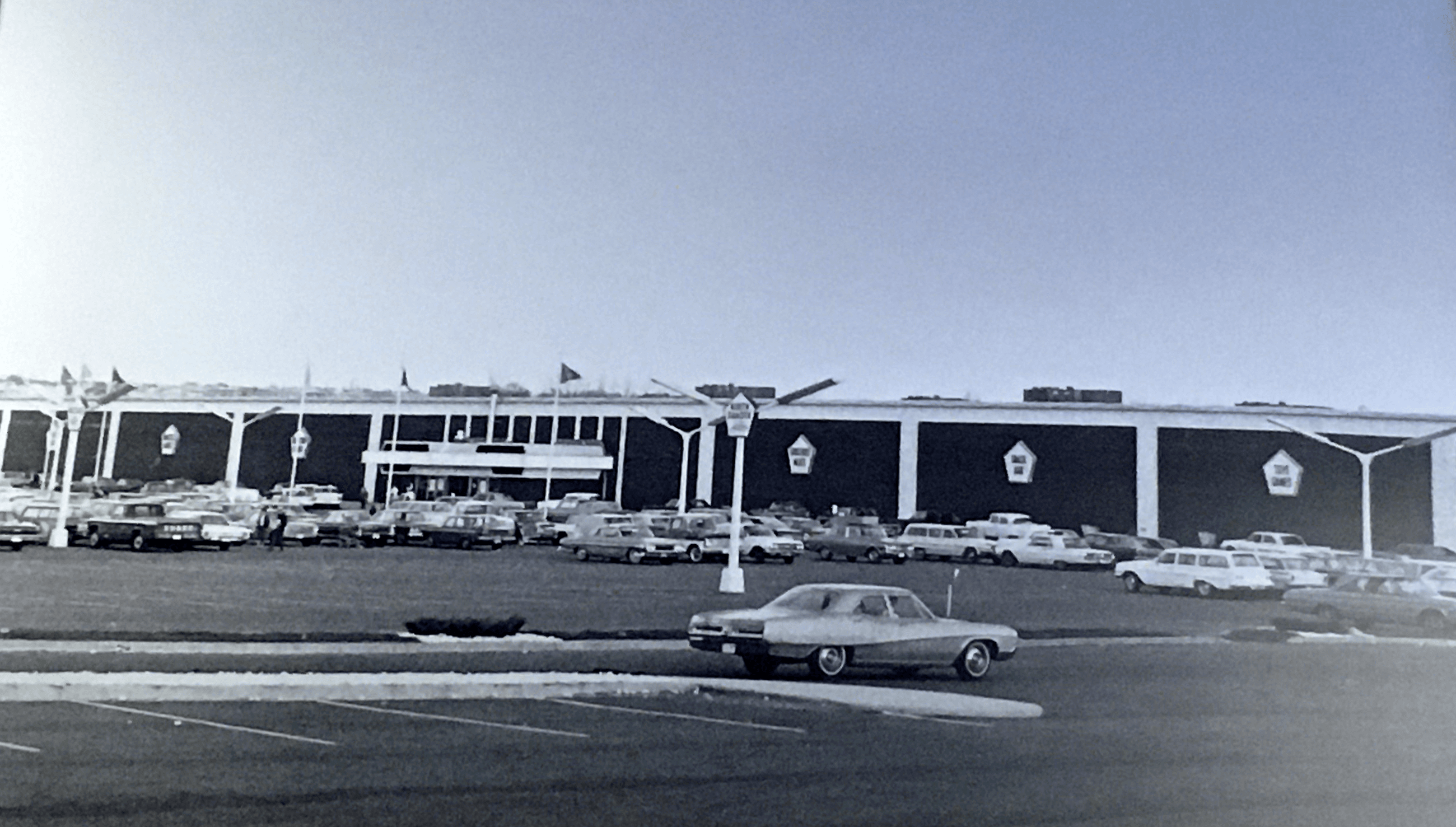 The Holiday Village North opened in 1966, and was the second Holiday store opened by Art and Al Erickson. These stores were bigger than any Super Target or Wal-Mart. The Fridley store was located at 5700 University Avenue. It operated as Holiday Village until the late 1970’s when it became Holiday Warehouse.

The “cart boys’ and the “bag boys” wore red or orange smocks. The store had everything you’d ever want or need to shop for. It even had a library in it for several years. There was also a travel agency, pharmacy, insurance agency, and a Red Barn there for many years. It had a pet shop, hardware and auto departments. A Furniture Barn store was located upstairs. It had a bottle room, shoe repair shop, hunting and fishing supplies, health and beauty department, camera shop, security guard, and a stereo department with 8-track tapes. They also sold records there, had a discount record center and always had the top 40 lists for people to take. Not to mention, a snack bar that sold delicious hamburgers and fries.

In 1982 Holiday Village North became Holiday Plus and stayed that until it was sold to Syd Applebaum in 1997, when it then became Holiday Foods. Applebaum then sold it to Cub Foods in 1998. Holiday Sports became Gander Mountain. 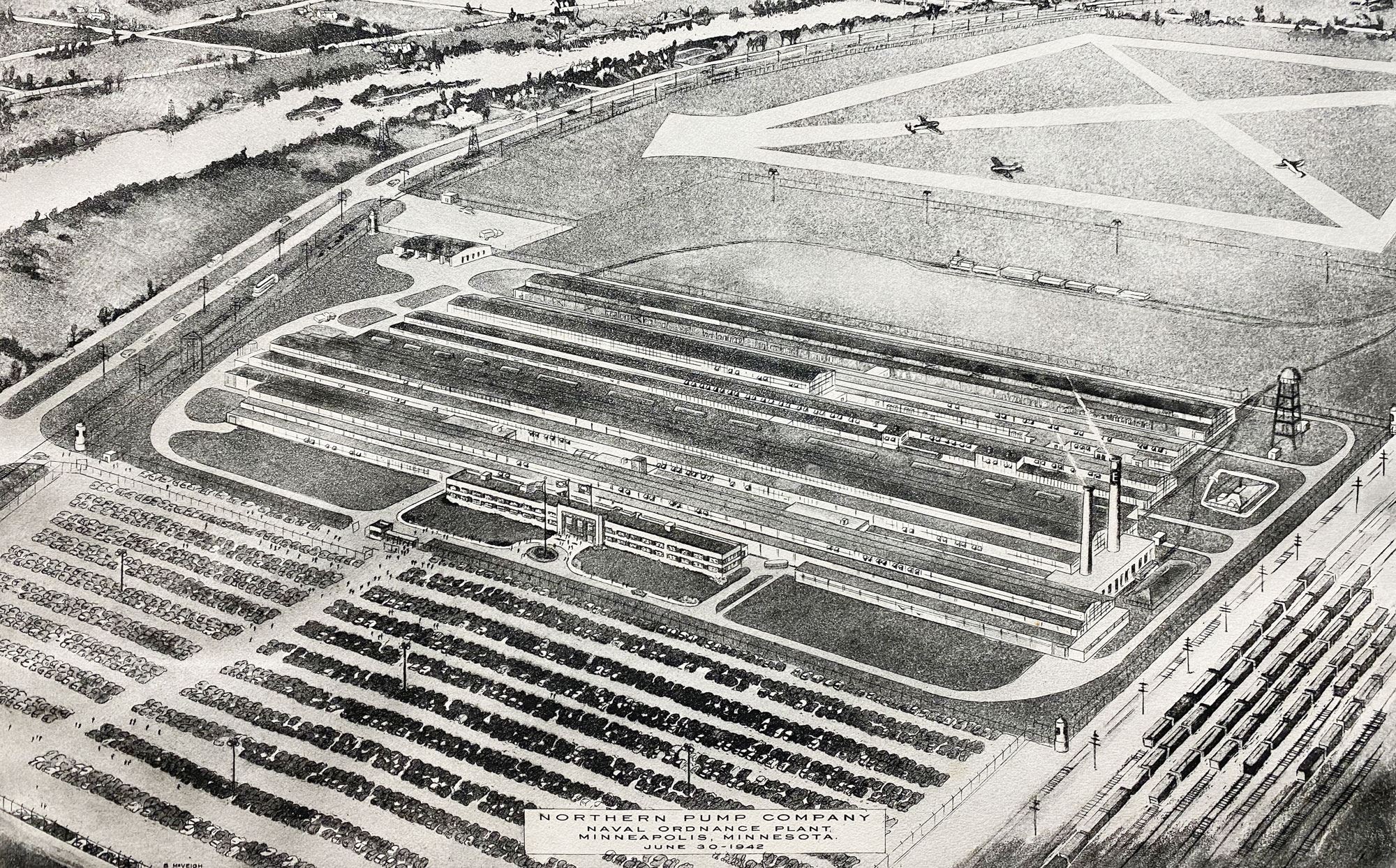 Fridley played a vital roll in World War II with the creation of the Northern Pump Company Plant. In 1940, Northern Pump President John B. Hawley purchased land on East River Road to build a $5,000,000 plant for the purpose of building gun mounts for Navy ships. With potential war looming, construction of the plant and the main building advanced rapidly and was opened in less than a year. The Department of Defense immediately awarded them a $60,000,000 contract for naval armaments and ordinance.

Thousands of men and women were hired to staff the new plant. A streetcar line provided transport to and from the plant and an airport was built north of the plant. The facility had its own railroad, fire department, police and guard units, and hospital. Mobile cafeterias kept employees working around the clock by bringing food and supplies to their workstations.

To keep the employees motivated and active, the company sponsored bowling teams, volleyball leagues, golf outings, canoe derbies and contests. Movies and shows were brought to the plant to provide entertainment along with celebrity appearances. The plant received several Battle E awards from the Navy for excellence and efficiency. 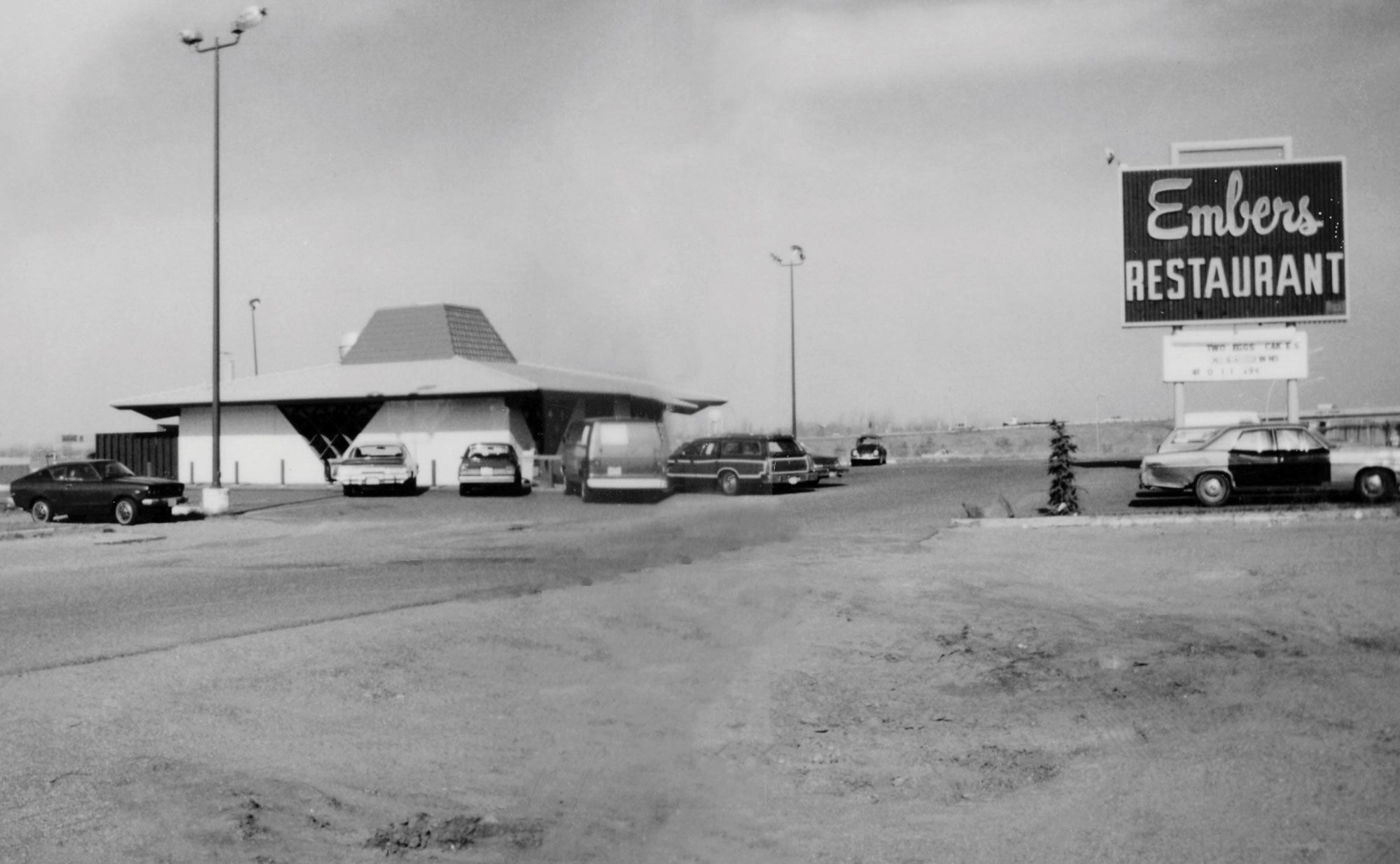 Ricky’s Embers kept the flames burning in Fridley as the final hold out of the Embers Restaurant chain until its closure in 2021. The first Embers Restaurant was opened by founders Henry Kristal and Carl Birnberg on East Lake Street and Hiawatha Avenue in Minneapolis in 1956. The star of their menu was the quarter pound Emberger, charbroiled and brushed with their secret barbeque sauce that sold for 45 cents. Six months later, they opened a second spot on Ford Parkway in the Highland Park neighborhood, and the concept took off.

In 1958, when Joseph “Ricky” Rickenbach heard of the exciting new chain of Embers growing like gangbusters in Minnesota, he quit his job at the cough drop factory in Reading, Pennsylvania, and landed a job as a janitor at the Highland Embers. Besides spending off-hours training in the kitchen and learning to cook, he and his wife Noreen did a lot of promoting from within. Joe Rickenbach was one of the first franchisers, and he chose Fridley Embers because he had grown up in the area, as well as attended high school and church in the community. He also liked the little A-frame which held a manageable 90 seats. “It was a scary decision,” says Rickenbach. “Denise and I had five kids - and the twins had just been born, but it was a great opportunity. Our kids like to work there, too.”

From the beginning, it’s been a family business. Joe called his business Ricky’s Embers after his dad, who coached him through financing the business, and he stayed on as facilities manager. “He’s like ‘Mr. Embers,’ so he doesn’t leave the place without talking to about 15 people. He likes to play up how hard I work him, and the customers think it’s hilarious.” It’s also hilarious is that people of a certain age still remember the restaurant’s jingle, “Remember the Embers!” 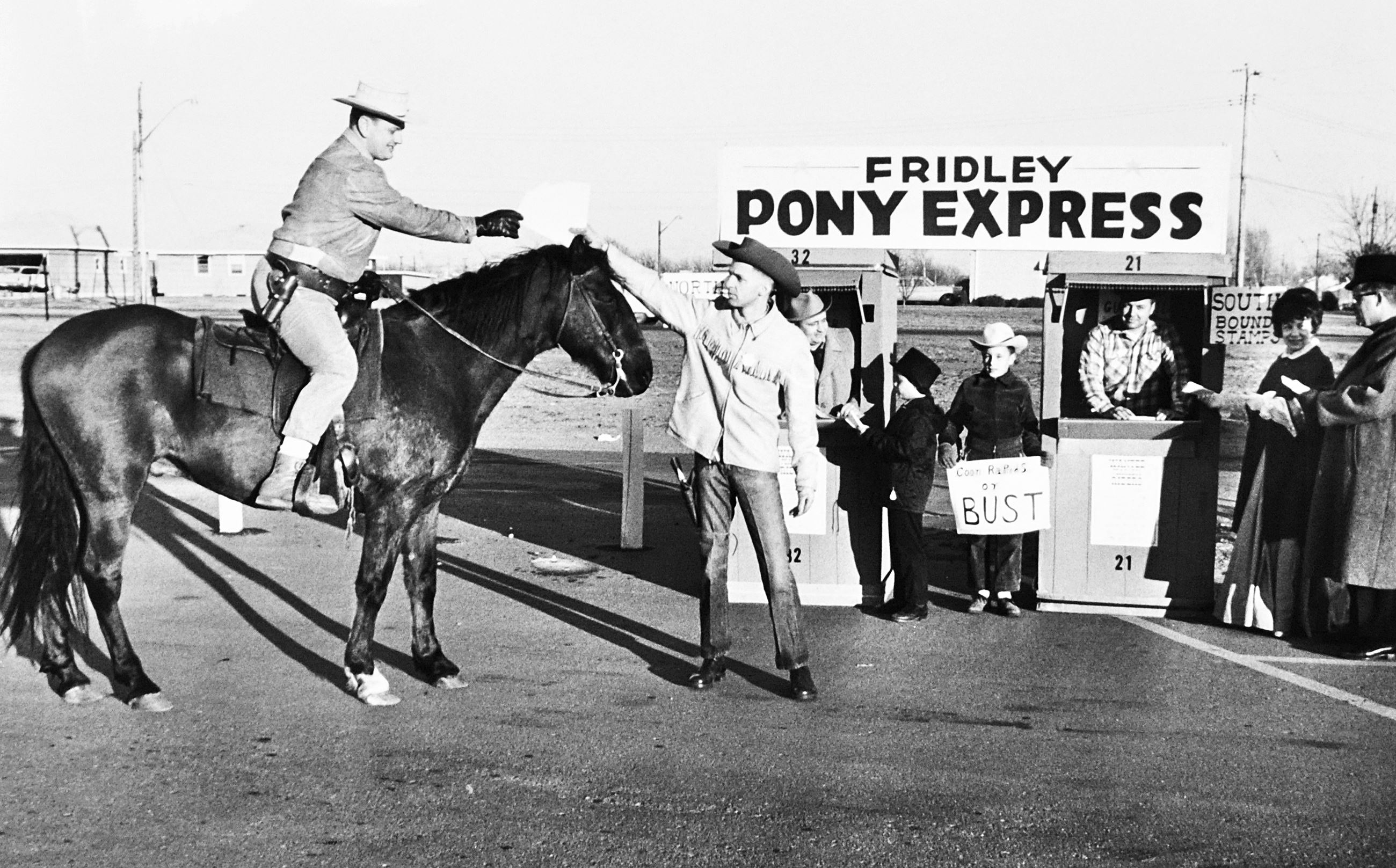 Fridley’s push to get a post office began with Fridley residents signing a “Post Office for Fridley” petition. The Chamber of Commerce Affairs Committee gathered factual data concerning the need for a post office in Fridley.  Seventeen civic organizations prepared resolutions supporting a post office and 125 businesses in Fridley were asked for statements concerning the need.  Individual residents dissatisfied with postal service in the city were also asked to prepare factual presentations of their complaints, and Fridley State Bank allowed them to have those letters mailed to the bank to the attention of Don Savelkoul, Chairman of the Chamber of Commerce and also on the Bank’s Board of Directors. One of their arguments was that Fridley’s estimated population was 26,000, and one of the fastest growing communities in the state. In 1965, in order to dramatize the fact that Fridley had no post office, Councilmen Jack Kirkham and David Harris set up this Fridley Pony Express stand, and sold Fridley Pony Express “stamps”.

Fridley got its Post Office in 1966. With the opening of the new Fridley Post Office on University Avenue, the City was split into two zip codes: 55421 which is still shared with Columbia Heights and 55432 is shared with Spring Lake Park.